I’ve visited plenty of customers who call their Toyota forklift a nickname like “Big Orange” or “The Boss” to be able to easily identify it from other forklifts in their fleet. These nicknames are great when communicating internally, but knowing and understanding your forklift’s model number will help you communicate more effectively with people externally, like your Toyota dealer or other company locations. Now, I know what you’re thinking. Wouldn’t it be great if there was a simple way to help you understand those seemingly complicated Toyota model numbers?

As with most products, Toyota model numbers are a combination of letters and numbers with each one having its own meaning. Once you understand the general sequence and meaning of each of these characters, you’ll be able to identify “Big Orange” as a THD2200-24 with pneumatic tires and 22,000 lbs capacity at a 24” load center.

There are two general model number formats for Toyota forklifts which are split up based on forklift capacity. The first format covers models with base capacities up to 17,500 lbs. 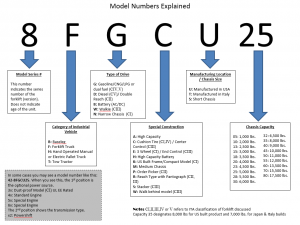 *Rated capacities should always be checked on the forklift data plate, which will be specific to your forklift’s configuration

As you can see in the diagram above, most models begin with a number signifying which model series it belongs to. For example, an “8” means that this forklift is an “8-series” model. Since model numbers are sequential, a higher number generally translates to a newer model.

The model series is followed by a series of letters, the first of which designates the category of the industrial vehicle. A “B” after the model series designator indicates the forklift has baselegs, which is commonly seen in model numbers for reach trucks and walkie stackers. The remaining explanations are pretty self-explanatory.

The third character in the model number indicates the type of drive or fuel type:

The next character indicates a unique construction and is not present on all models. A model with cushion tires has a “C” in this position, and the lack of a letter “C” means that the forklift has pneumatic tires.

One tricky character here can be the letter “E”, which can mean the truck is a 3-wheel electric or an end control rider model. The difference is easily distinguishable by looking at the entire model number. Any model with an “F” in it is a forklift and any with an “H” are hand operated. So an “8FBE15U” is a 3-wheel electric model and an “8HBE30” is an end controlled rider. Three-wheel electric models also have optional pneumatic tires, so you can’t rely on the model number alone to determine tire type in this case.

The next letter is generally a “U” signifying that the forklift was built in the United States. If there is no “U”, it means the forklift was built somewhere outside of the United States. There are some models where an “S” actually appears before the “U”, which indicates the vehicle has a short chassis. An example of this would be the 8FGCSU20. As of 2013, Toyota began placing the “U” at the end of the model number with the launch of the mid and large IC models built in Columbus, Indiana. This trend will continue to occur going forward.

Last, but not least, is the base capacity indicator. There are some exceptions, as noted above, but generally the number represents base capacity in tons with one decimal place. So a “25” here would indicate that the base capacity is 2.5 tons or 5,000 lbs. Tonnage is sometimes rounded due to the fact that two numbers for tonnage are used. Be sure to always refer to your forklift’s data plate for capacity information related to your specific forklift configuration.

The second model number format applies to Toyota’s THD model lineup with capacities of 15,000 lbs and above. 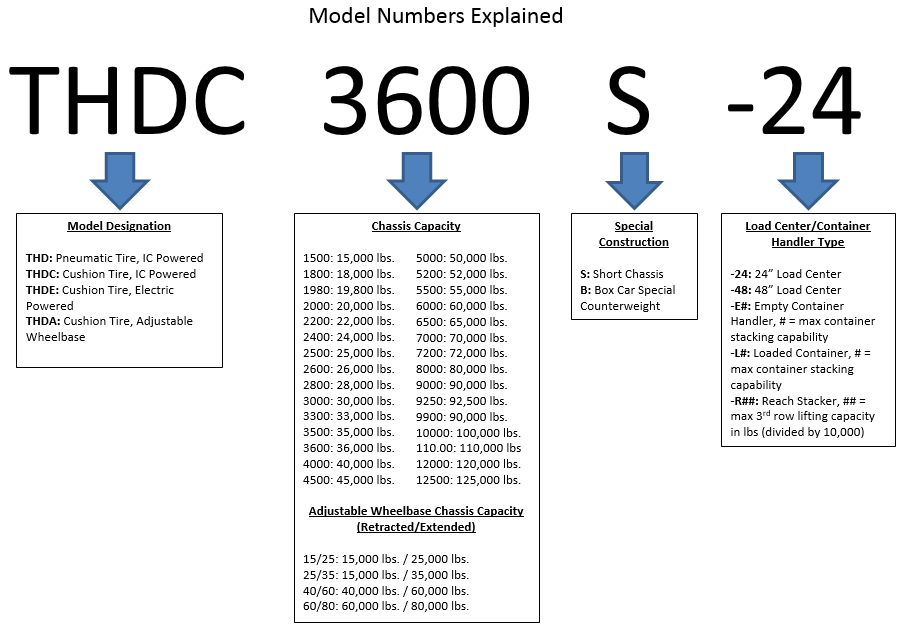 *Rated capacities should always be checked on the forklift data plate, which will be specific to your forklift’s configuration

THD models have four unique designators, beginning with the model designation. “THDC” means it is a cushion tire IC model while “THDE” means it’s a cushion tire electric. “THD” alone means that it is an IC forklift with pneumatic tires. Pretty simple, right?

The third designator indicates a special construction with “S” indicating a short chassis model and a “B” indicating a box car special model with a special, compact counterweight.

And that about does it! Hopefully you understand a little more about how Toyota’s model designations work and can begin identifying characteristics for all of your forklifts.